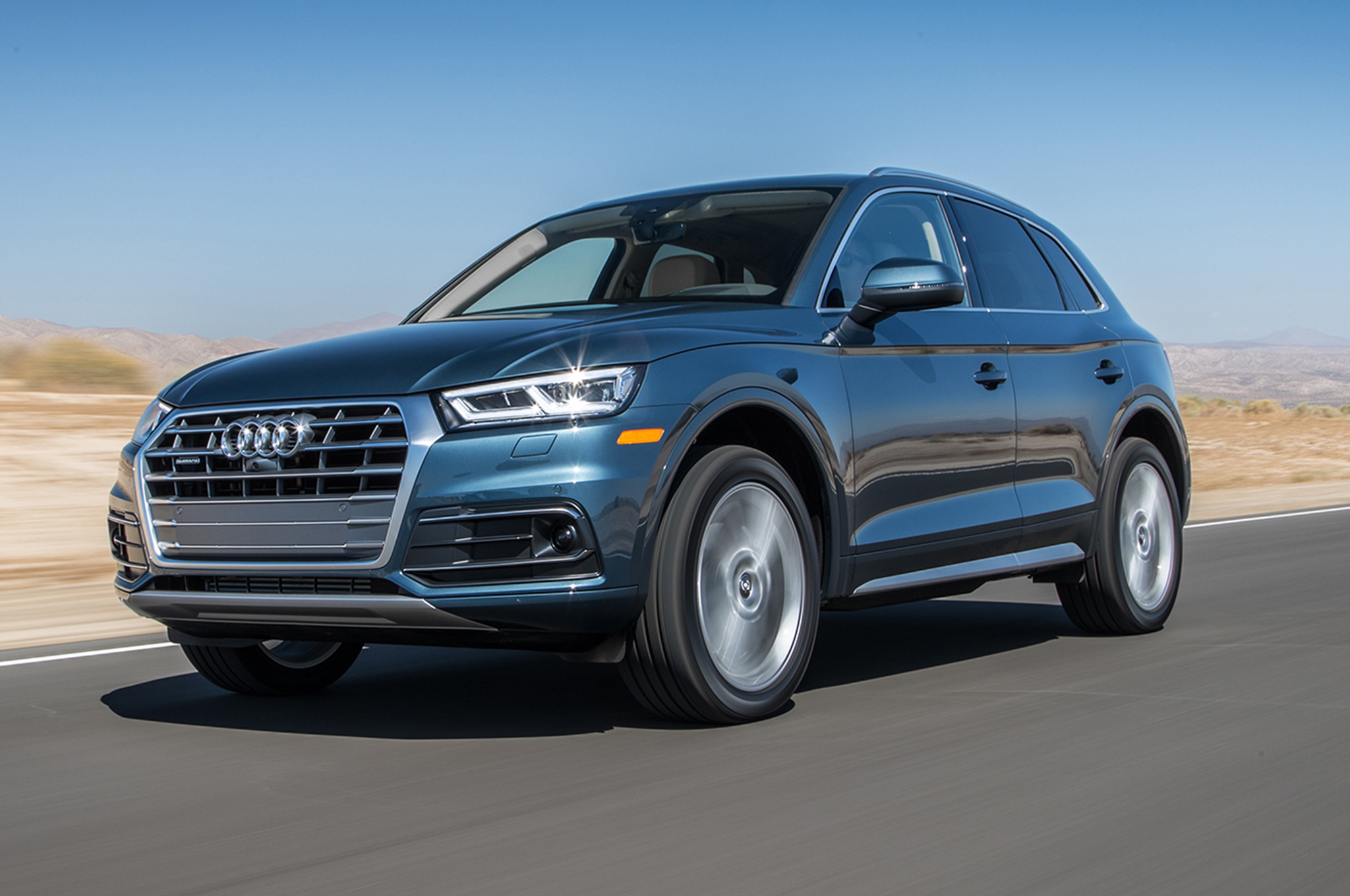 You might be surprised to learn that the midsize Q5 crossover is Audi's best-selling vehicle-about five times better last year than the A5 from which it sprang, and easily outselling the A4, as well. Based on the same laudable MLB chassis that mounts the engine north/south (unique in this largely FWD-based segment that typically uses east/west), the 2018 Q5 comes standard with all-wheel drive and a turbocharged four-cylinder engine. It also grows in just about every dimension. Not seeing a major redesign since it was introduced in 2009, the more sharply sculpted Q5 also gains a much-needed interior makeover to catch it up to the rest of the current-era Audi electronics and aesthetics.

Improved Performance
The revised 2.0-liter Audi TFSI engine gains 32 horsepower, 15 lb-ft of torque, and a new seven-speed dual-clutch automatic transmission replaces an eight-speed automatic. The impressive results are improved fuel economy (gaining 3 mpg in both the EPA's city and combined cycles over its processor) and better acceleration. Our testing produced a snappy 5.9-second 0-60-mph time, which is a second better than the 2017 model and puts it within a half second of the much-ballyhooed Alfa Romeo Stelvio. It's quick, but the Q5 is also smooth. The shifts from the new transmission, dubbed S Tronic, are rapid and nearly imperceptible-and it doesn't have that lurch from a stop or low-speed shift-shudder that some other similar, automated manuals do. Even the engine's fuel-saving automatic stop/start is swift and unobtrusive. 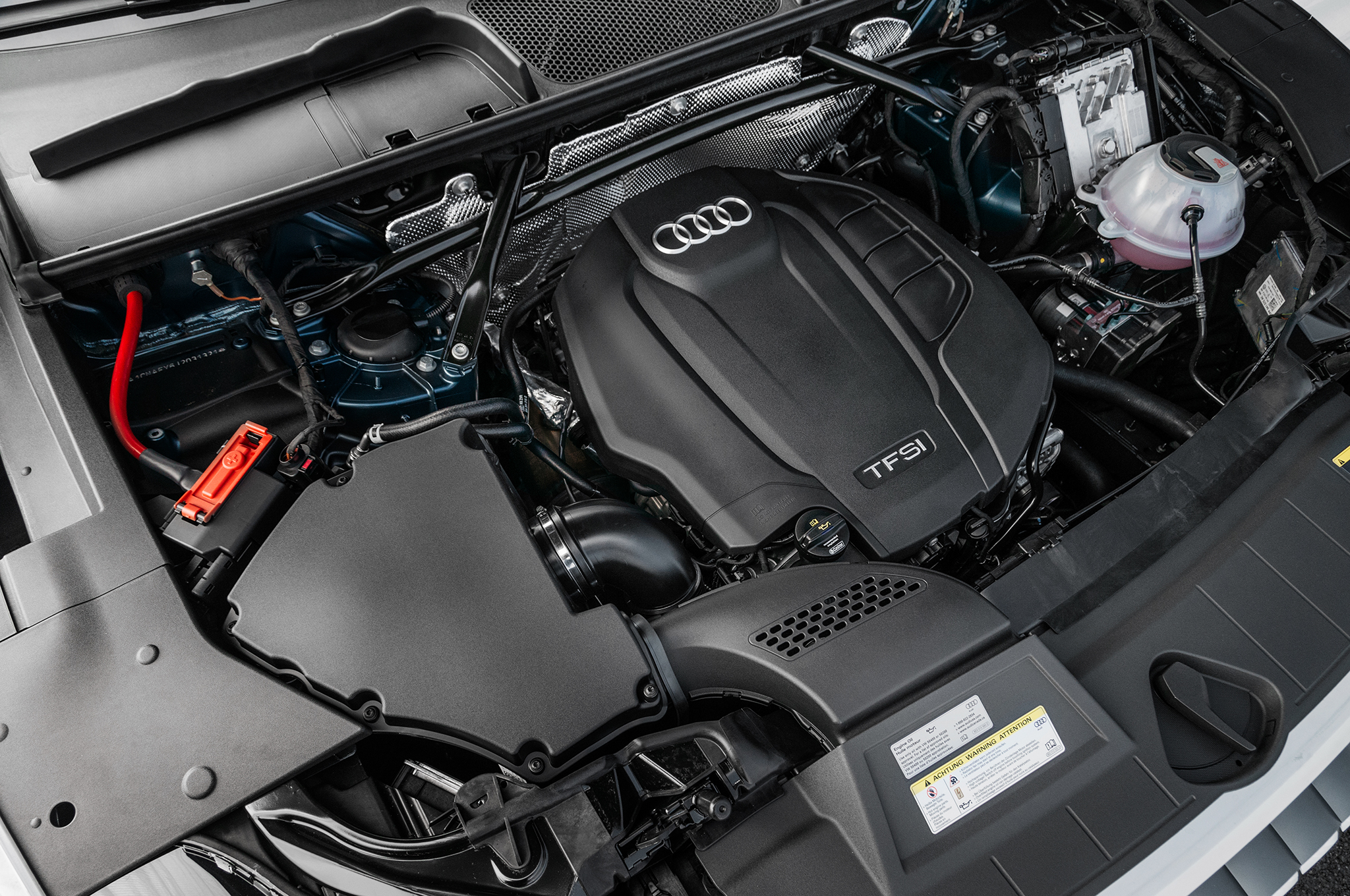 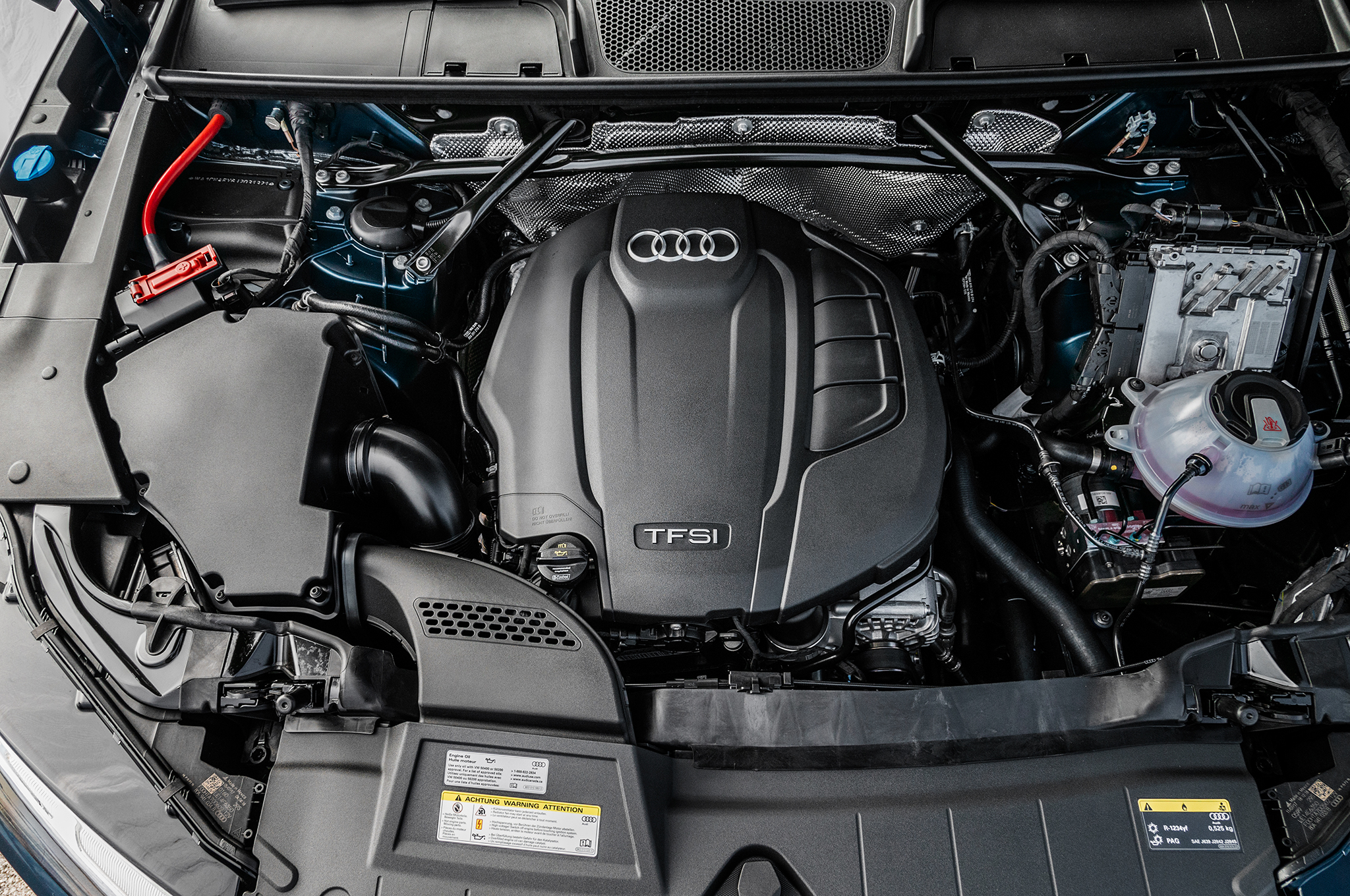 Highway Manners
Because our example was also equipped with multimode adaptive dampers ($1,000), the Q5's ride quality was excellent. There are distinct differences between the Dynamic and Comfort settings (you can build and save your own mode with the Individual setting), and the magic Auto mode would likely be where most owners would leave the drive mode selector. It was able to detect a choppy concrete highway surface and add just the right amount compliance to smooth it out. Newly available with the 2.0-liter engine, our Prestige model (an exhaustive and worthwhile $9,300 option) was equipped with, among other things, 255/45R20 tires and more importantly double-insulated front-side glass that contributed to a very hushed cabin, even at closed-course 100-mph speeds where wind, tire, and road noise were noticeably unnoticed. Revised front suspension and steering is said to provide more precision, and we believe this. However, some said they'd prefer a little more torque buildup coupled with vehicle speed. On twisting roads, despite active torque distribution, we found the Q5 tended to understeer too soon when pushed too close to the 0.79g lateral acceleration limit even in Dynamic mode. Odd. 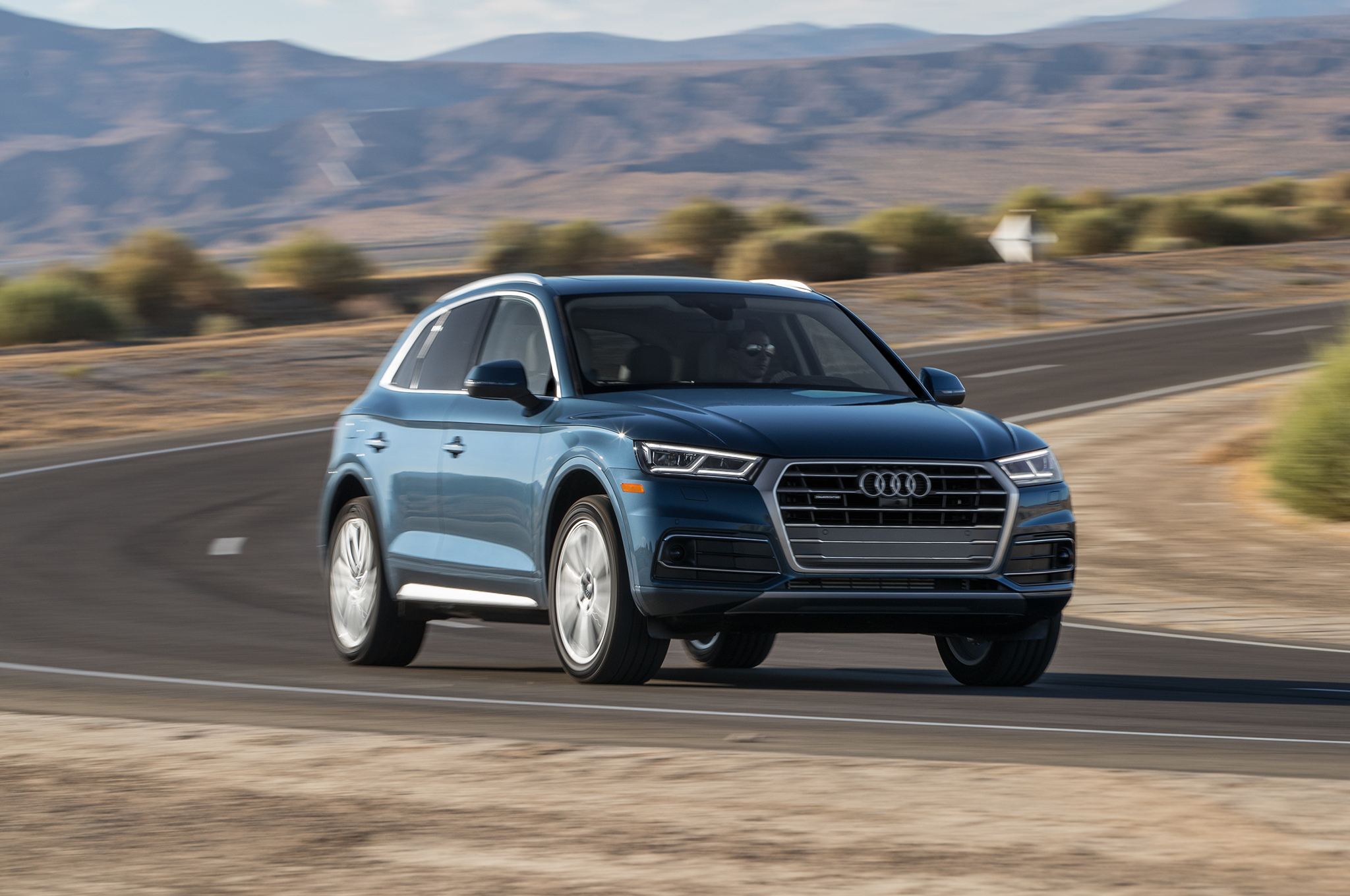 Down and Dusty
We had an opportunity to get the Q5 a little dirty with several loops of a 1.3-mile course that included flat and inclined deep sand (the California desert analog to snow), tight and fast corners, a 50-mph ?fire road? with some washboard areas, and a packed-but-slippery ascent and descent. Despite Audi engineering a more front-biased all-wheel-drive system in the new Q5, it dispatched all the off-road challenges with the ease one would expect of an SUV with the word ?quattro? on the back. Stop in the sand (typically not advised)? No problem. Stop on half way up the hill? Got that covered, too. It was encouraging to know we had over 8 inches of ground clearance and to find ?Allroad? mode among the drive modes and a nifty dedicated display that Frank Markus noted: ?shows the vehicle's pitch and roll angle and also the steering angle. It looks as though it keeps track of the maximum inclines/declines and cross-hill angles the car has experienced.? We wished the hill-hold feature would release the brakes after the turbocharger had spooled up (not before) and that hill-descent control would allow for tailoring the speed, which was 6 mph on our not-so-steep downhill. Small easily dismissed criticisms of an otherwise capable SUV. 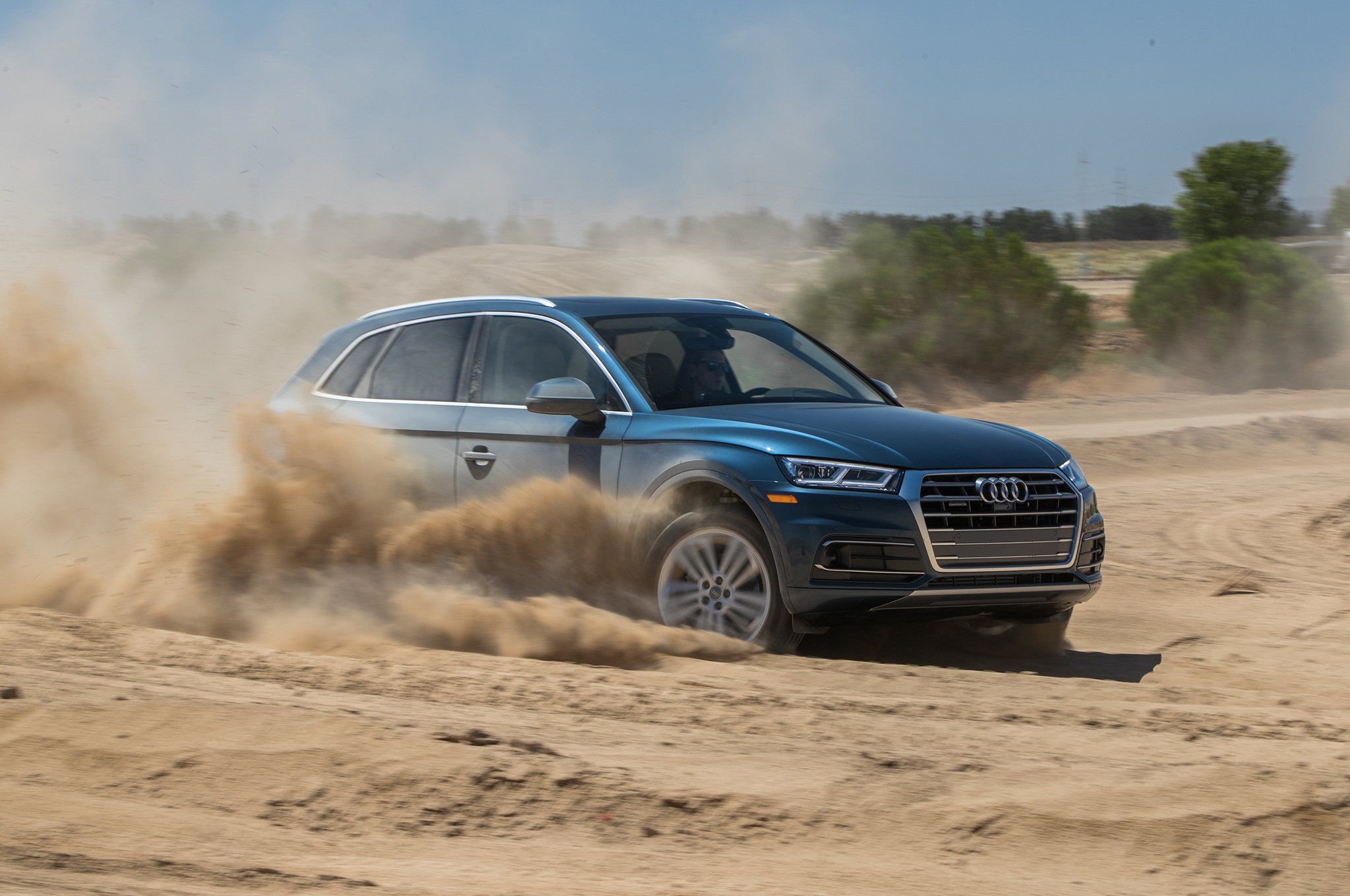 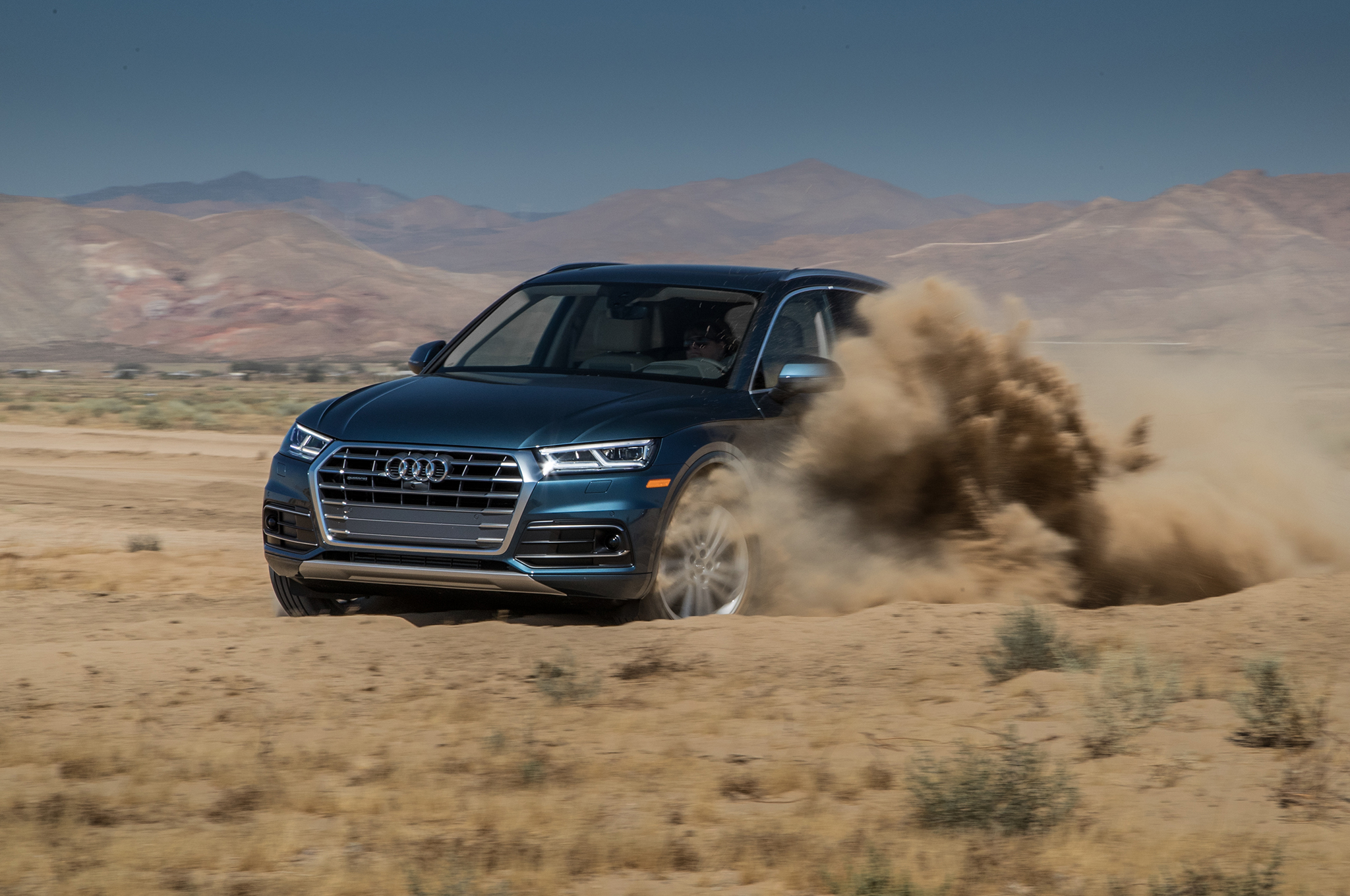 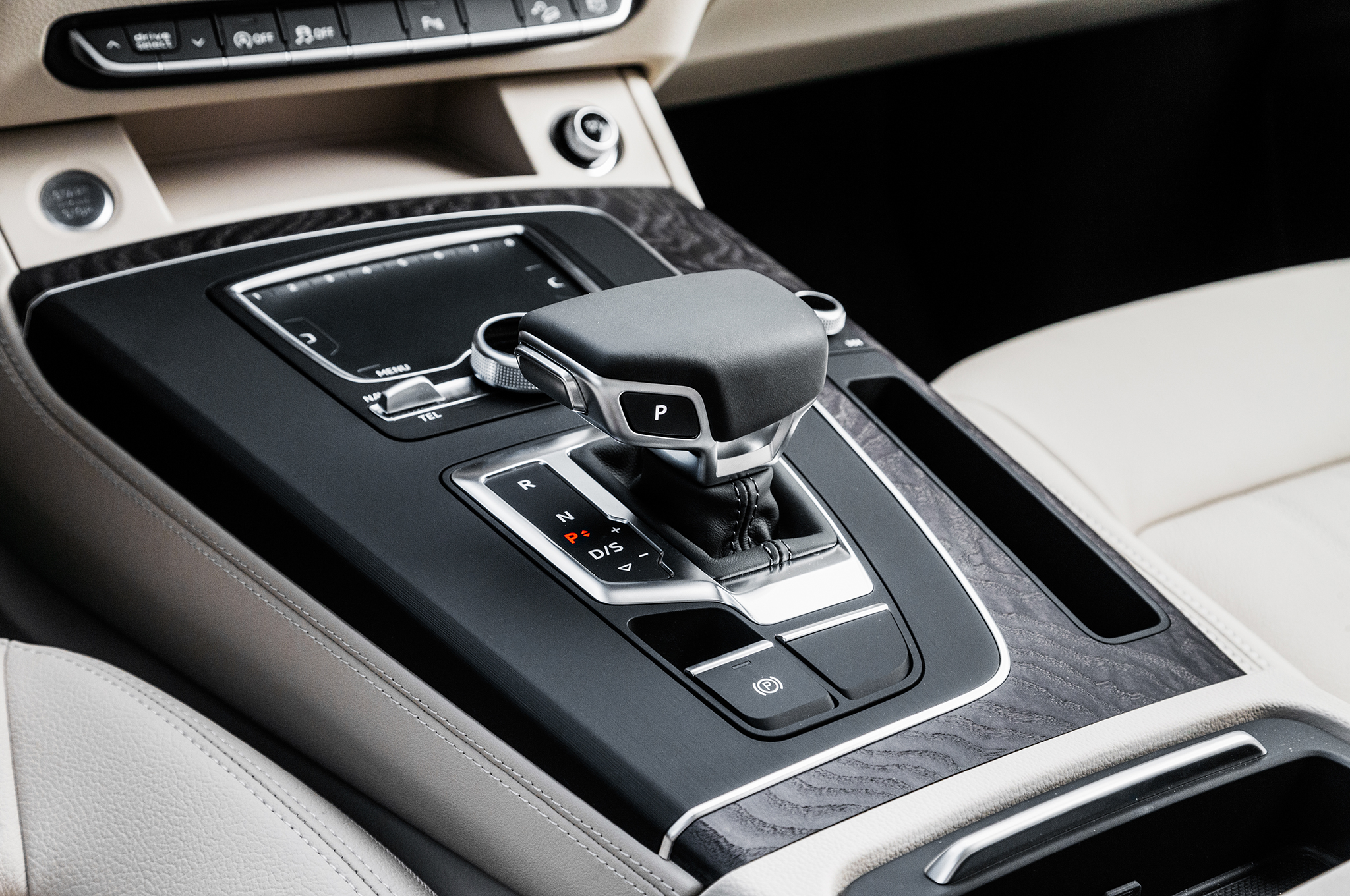 You'll find touch-sensitive aluminum buttons for climate control, the latest version of Audi's MMI controller, and-because we had the Prestige option-the ability to ?write? numbers/letters on the provided pad. There's also Audi's game-changing 12.3-inch Virtural Cockpit instrument panel plus the larger 8.3-inch central display. The optional fine-grain open-pore Ash trim ($850) also added to the understated elegance and sophisticated ambiance. Some of our larger-framed staffers found the front seat bottoms too short to provide enough thigh support, but all agreed the lateral support was very good. The 40/20/40 split rear seats offered better-than-average visibility, comfort, and room, especially under the front seats where some cram all manner of foot-impacting goods. We were also happy to find standard digital controls for rear climate controls/vents, a large armrest with pop-out cupholders, and a 12-volt socket, but there were no USB ports/charge points. The standard power rear hatch opens to reveal a 26.8 cubic-foot cargo area that increases to a whopping 60.4 with the rear seats folded nearly flat. There are also two grocery bag hooks and four cargo tie-downs. 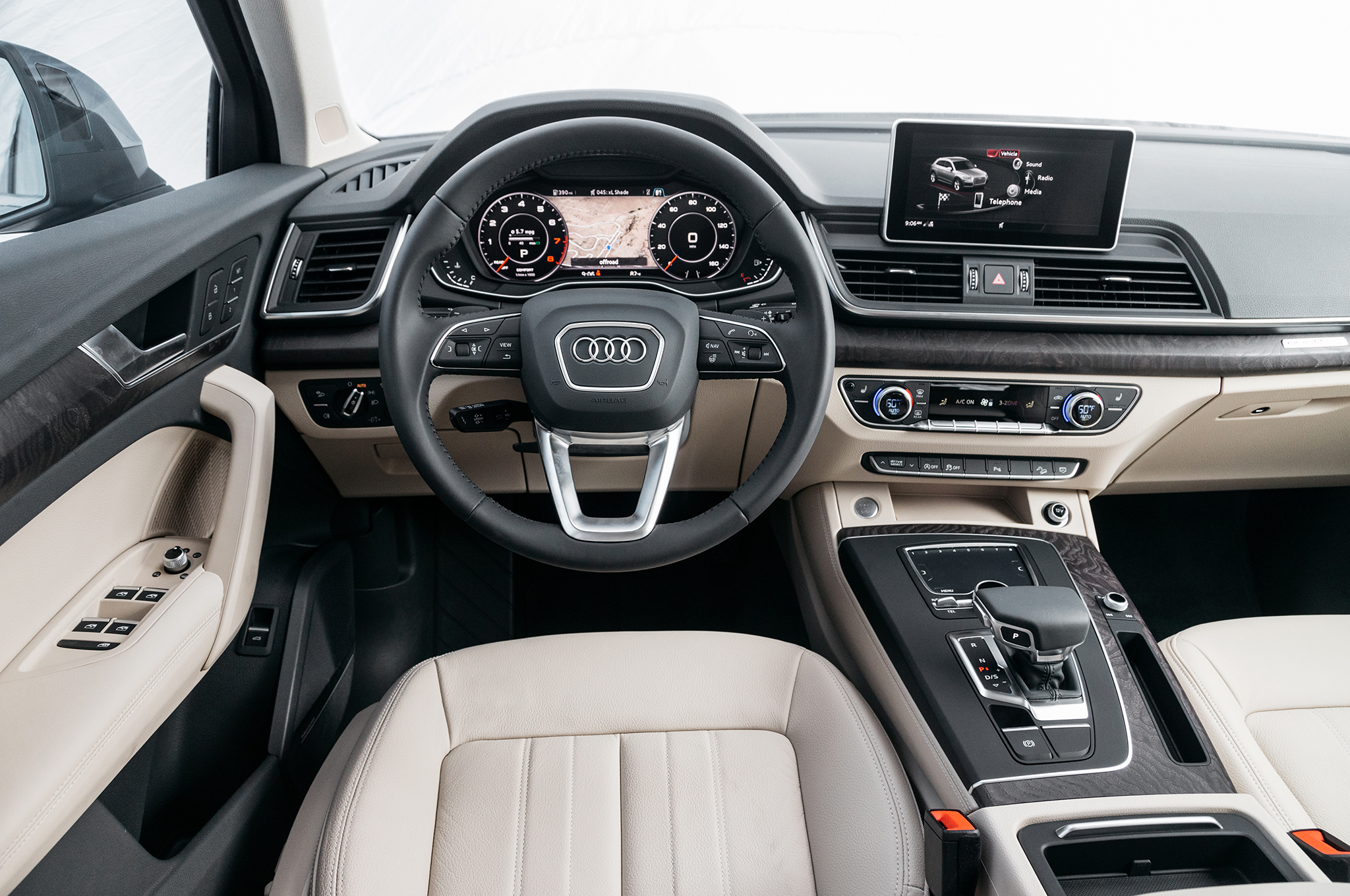 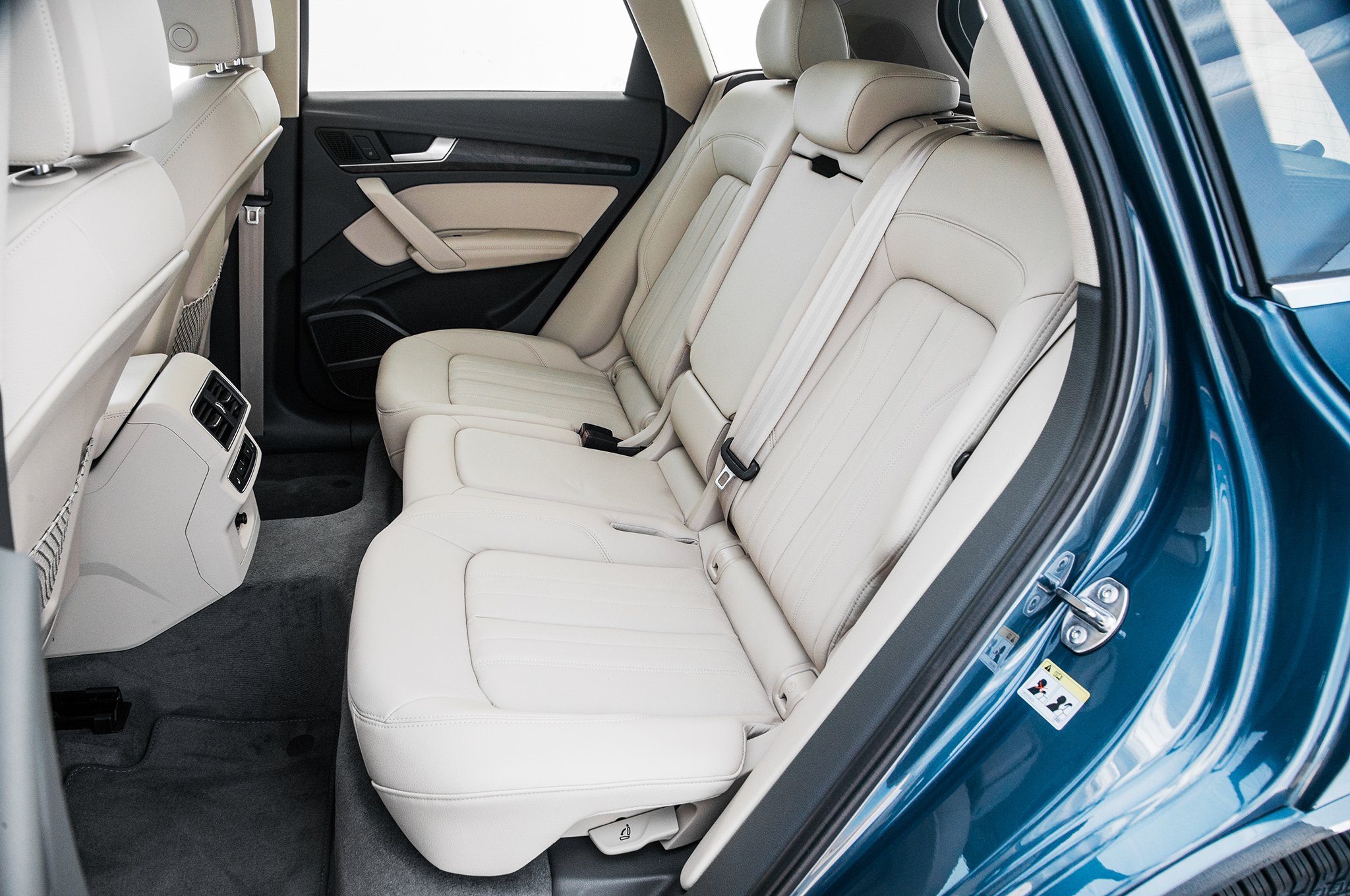 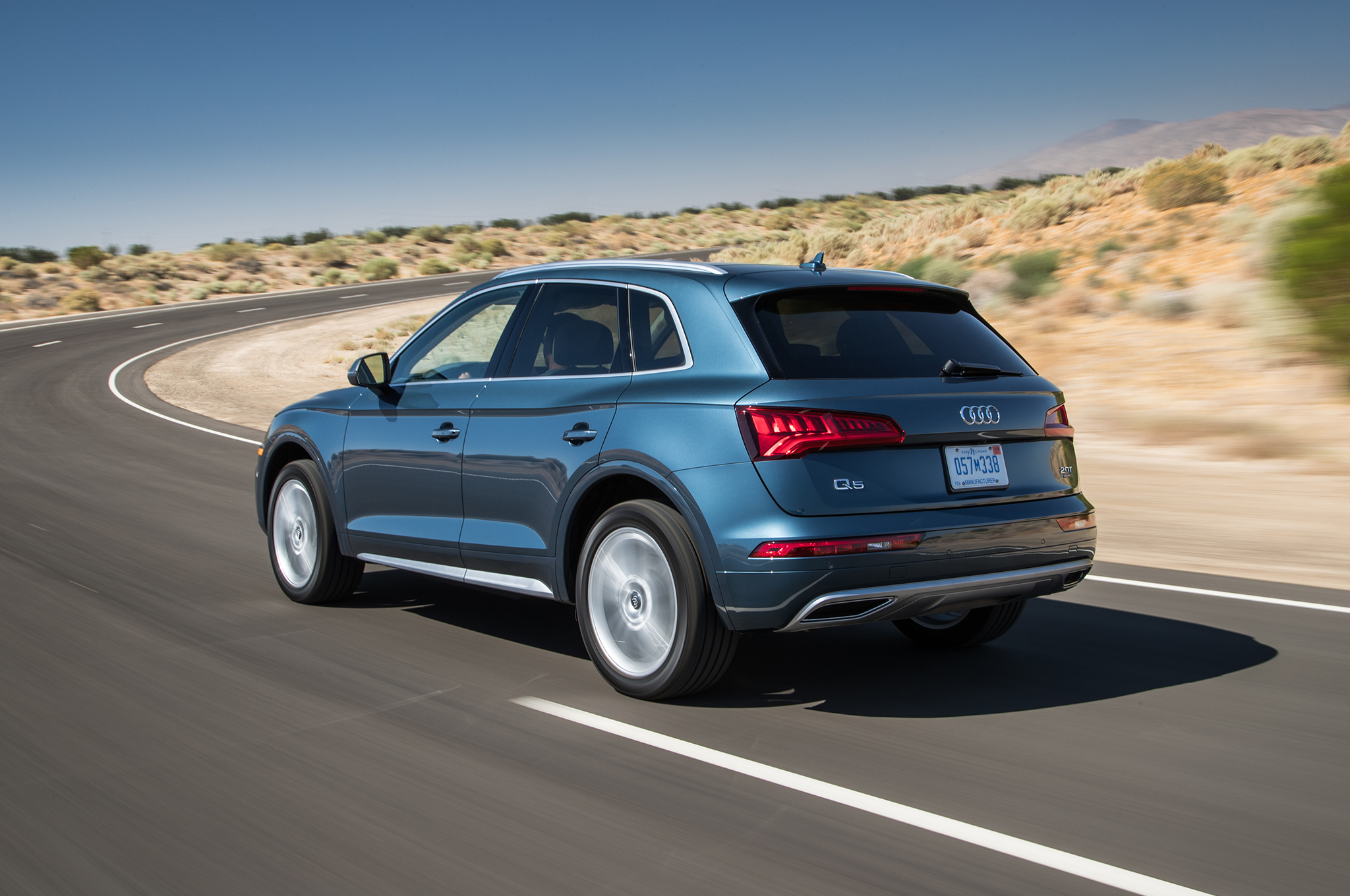 Conclusion
With legions of folks who already were snapping up the Q5 for their own reasons, everything Audi did to this vastly improved 2018 version will certainly keep it at the top of Audi's charts. With improved nonlozenge exterior styling, performance, and efficiency along with a greatly improved interior with more room and features and unimpeachable off-road abilities, even more people will find it attractive. It's currently neck and neck with the Mercedes-Benz GLC in terms of sales, far outselling the Porsche Macan. In just the first seven months of 2017, the Q5 outsold itself for all of 2016. It looks like Audi is going to have another record-setting year on its hands. Well done. 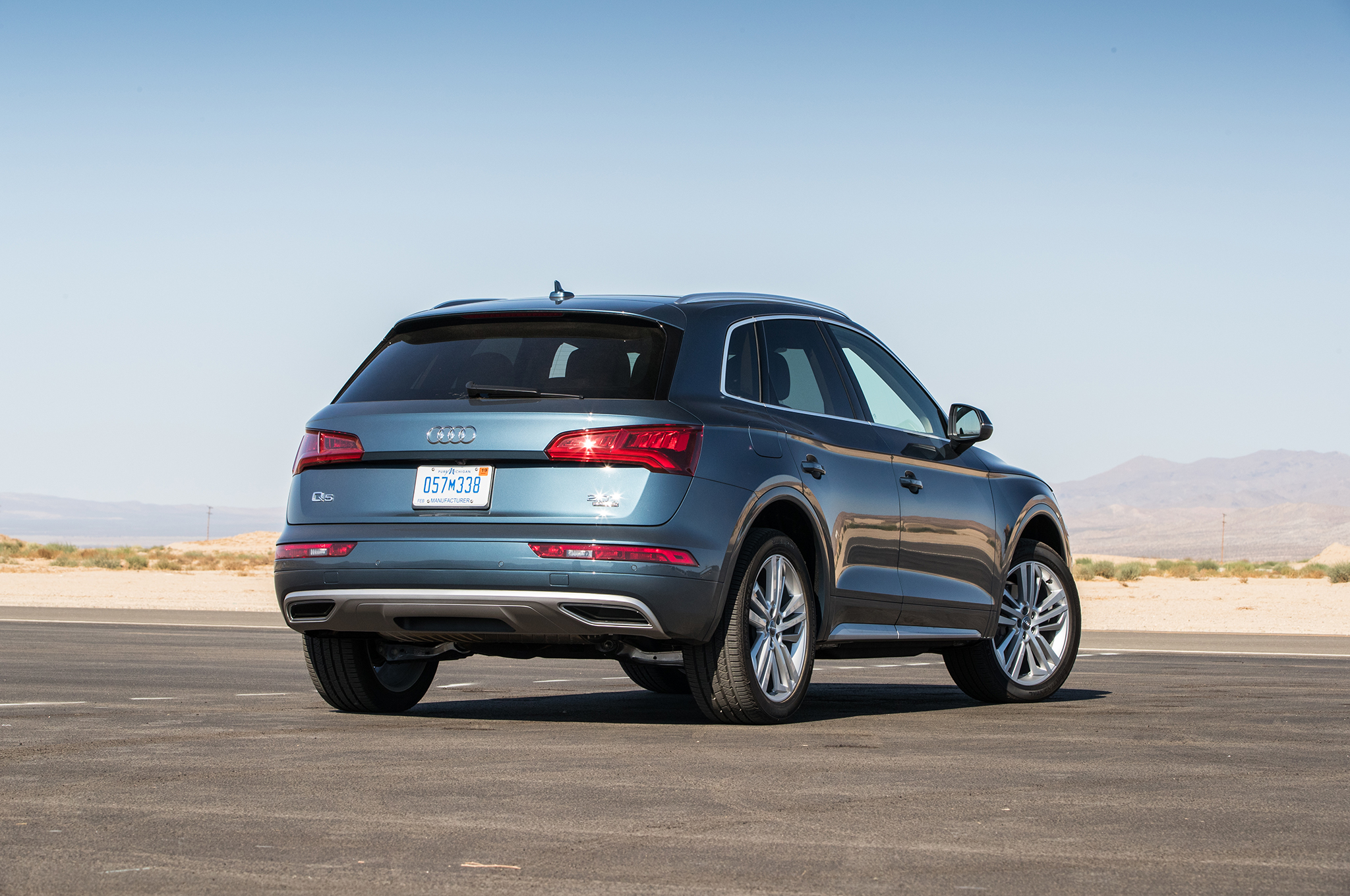 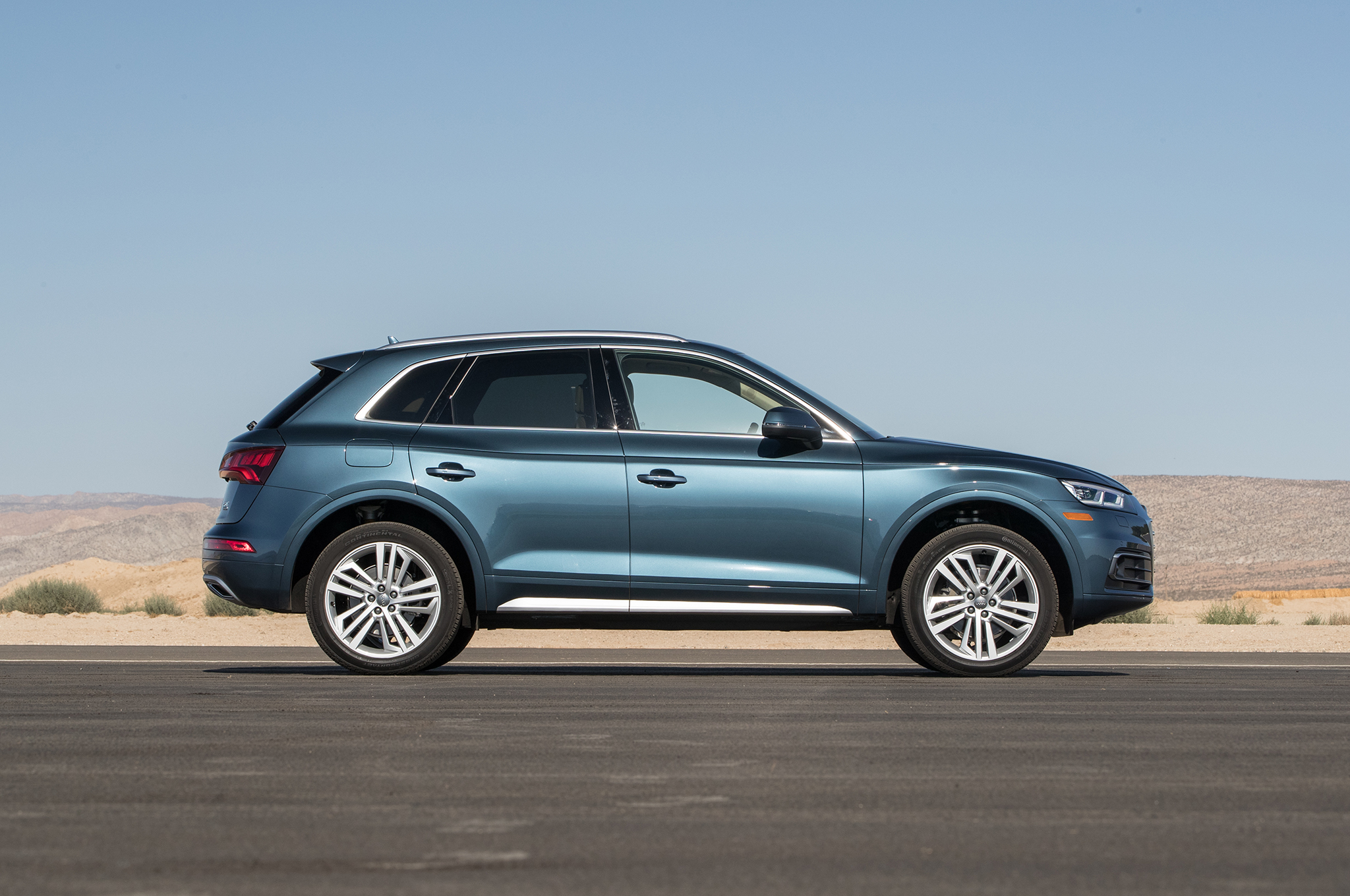 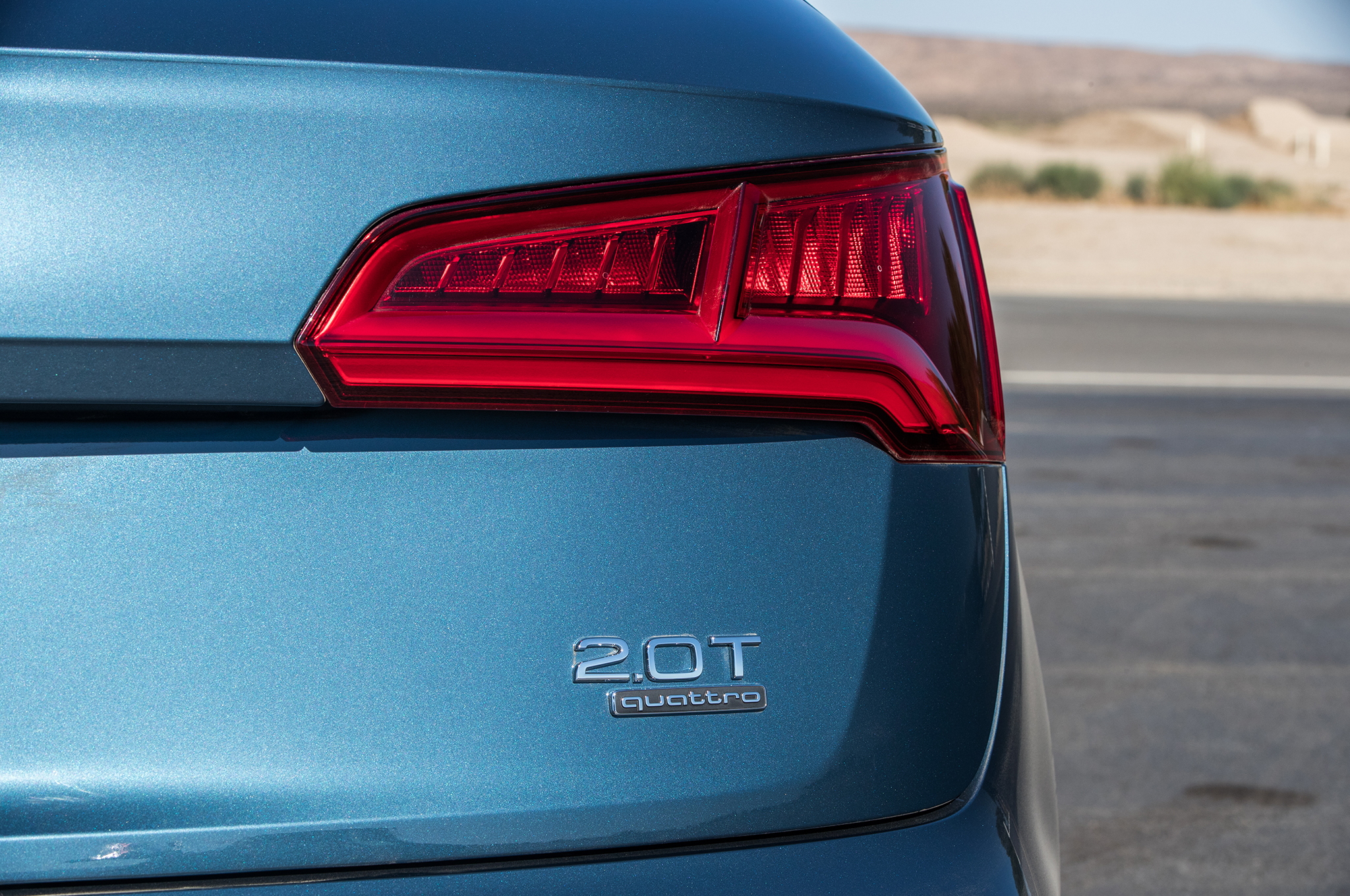 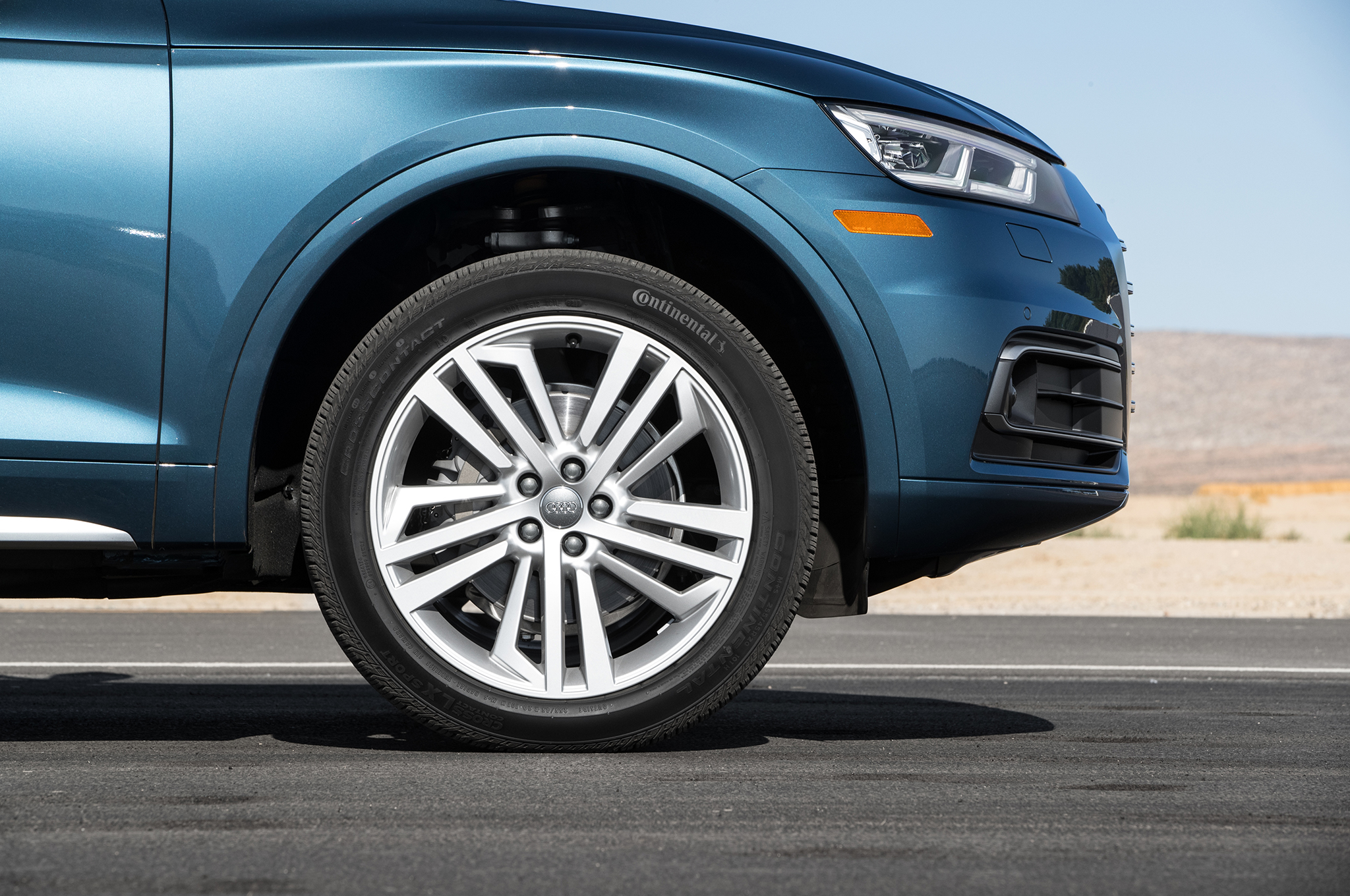 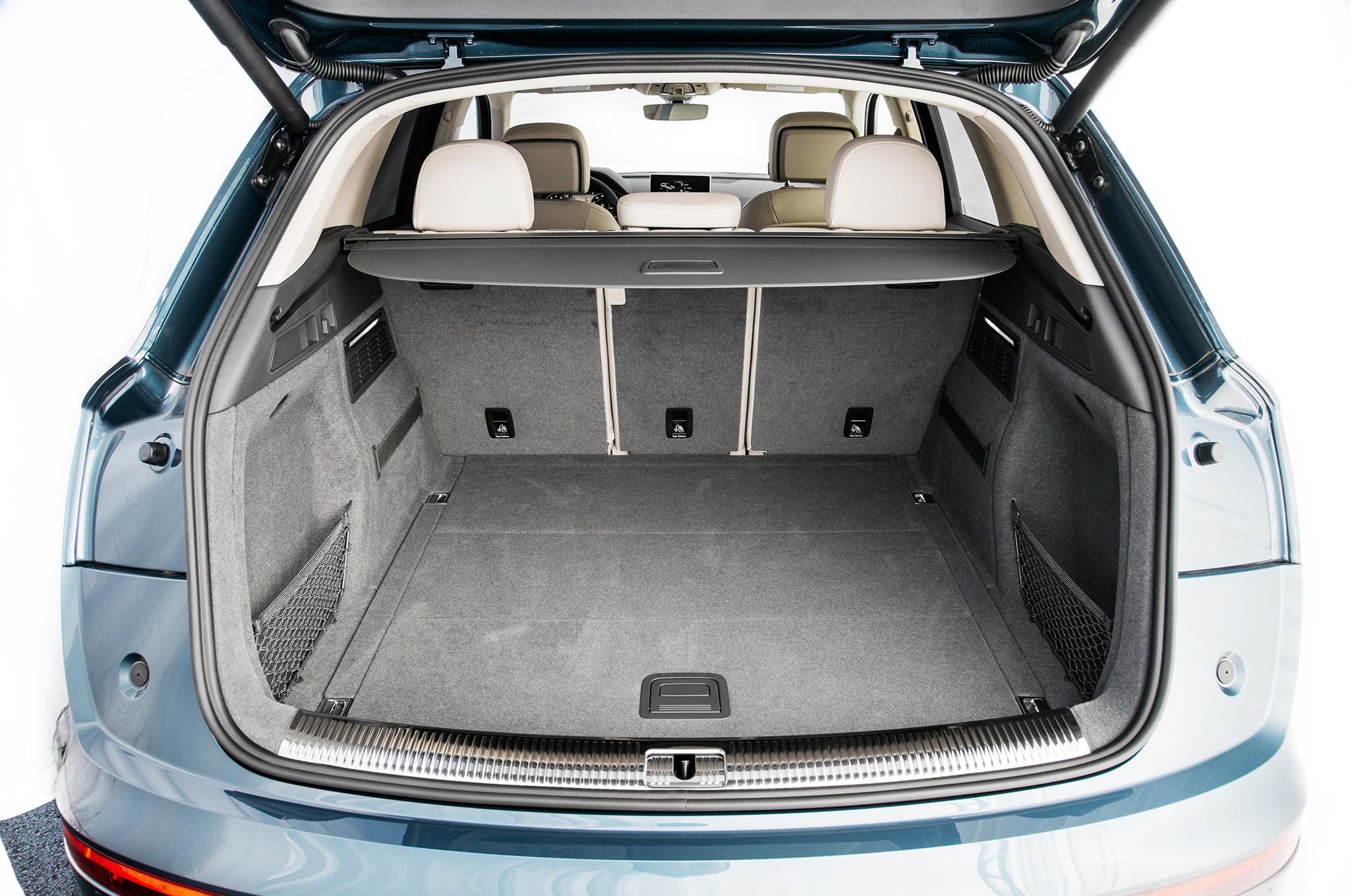 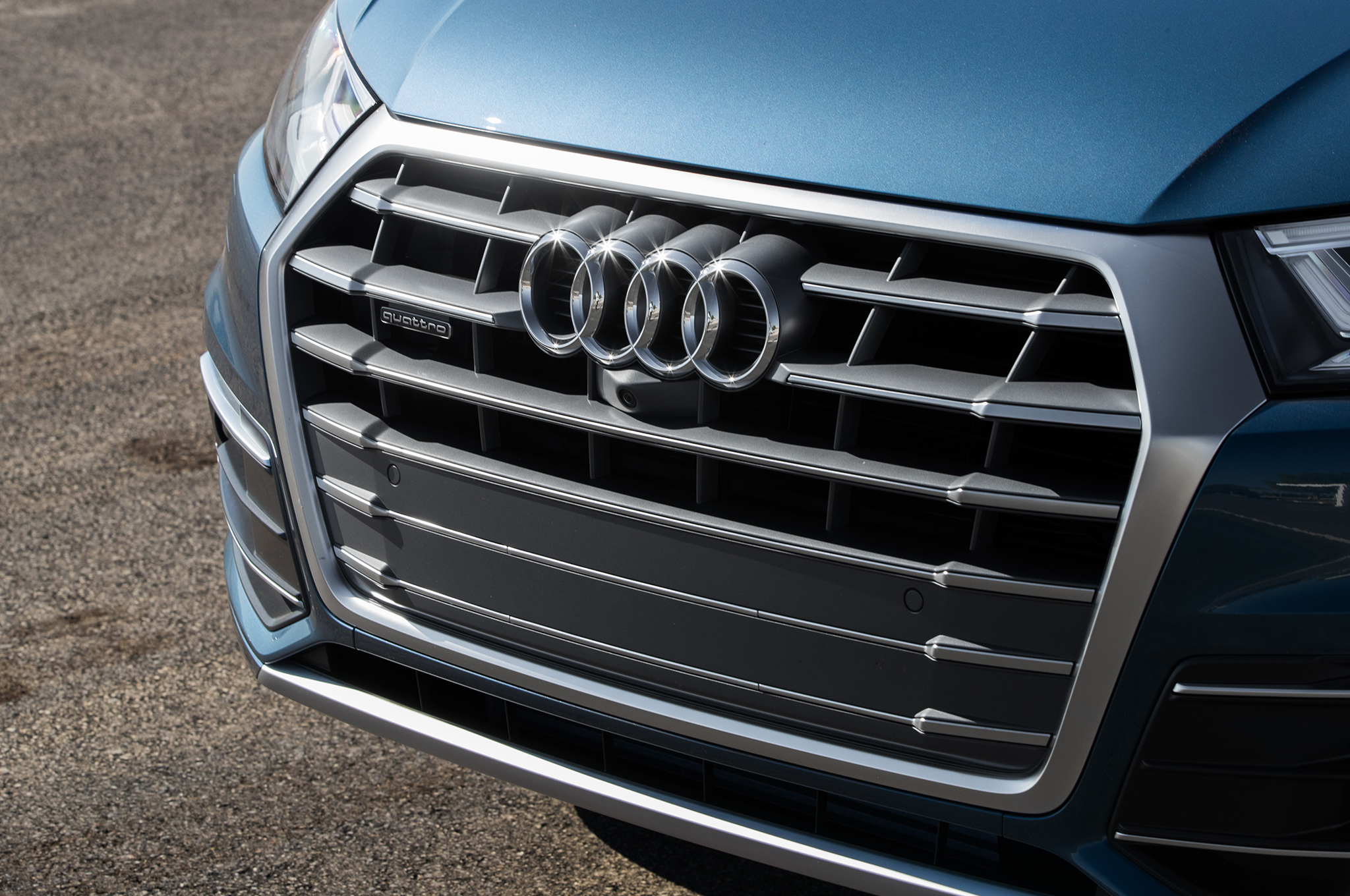